The Three Stages of a Developer

How developers develop themselves

That was one reply to my article about testing:

No. Really good code no needs for testing. If your hands is crooked then no any testing can fix it

Do I sense some irony here?

I have more than 10 years experience. It is sufficient to my statement. 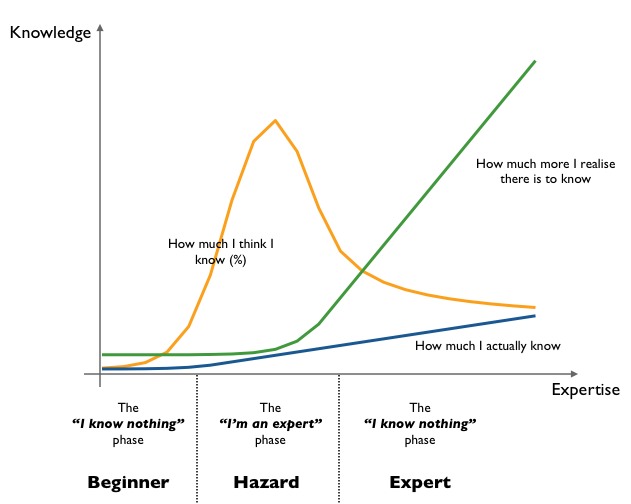 Actually, I've been thinking about this and my personal development for a couple of years.

First, I recognized that I was changing a lot of things, about how I code and how I look at technology and problems.

I started to code very early in 5th grade. By the time I was done with secondary school, I decided not to study computer science (and went for electrical engineering instead) because I thought there's nothing more I could learn about programming. I thought, I was just the best programmer in the world.

As you already may guess by now, I was totally wrong. ??‍♂️

I had to learn what software engineering is about: Architecture, testing, performance, maintainability and much more that I have not really considered being an important part, in fact being the distinction between a programmer and a software developer.

So I read a lot of articles, books and tried to turn all the knobs to 11 which led to very complex software that was build to cover all possible cases that could ever happen.

There are a couple of similar articles like this. In fact, there are plenty of suggestions about possible phases, you can have 4, or five or even more (see References. All tackling slightly different aspects of being a programmer.

From my perspective, I distilled my personal evolution into three phases and its transitions:

After failing in a couple of projects, I read articles and books about what I could do and try to apply all of that which leads to

After also failing with the previous approach, I tried to:

Those three phases are not scientifically proven. In fact, it's just what I've personally learned by thinking about myself on the one hand. There even might be other phases, I haven't experienced yet. On the other hand, it seems to fit to a lot of developers I've met during the last 15 years.

You can't necessary assign years of experience to those phases, some might as well skip a phase or it's been reduced to a short period depending on the personality, the way of learning or mentoring.

The most important thing is: You never never stop to learn. Make sure there is always someone smarter than you.

I learn new things every day and I am very grateful for my colleagues and friends.

Do you find any similarities in yourself?